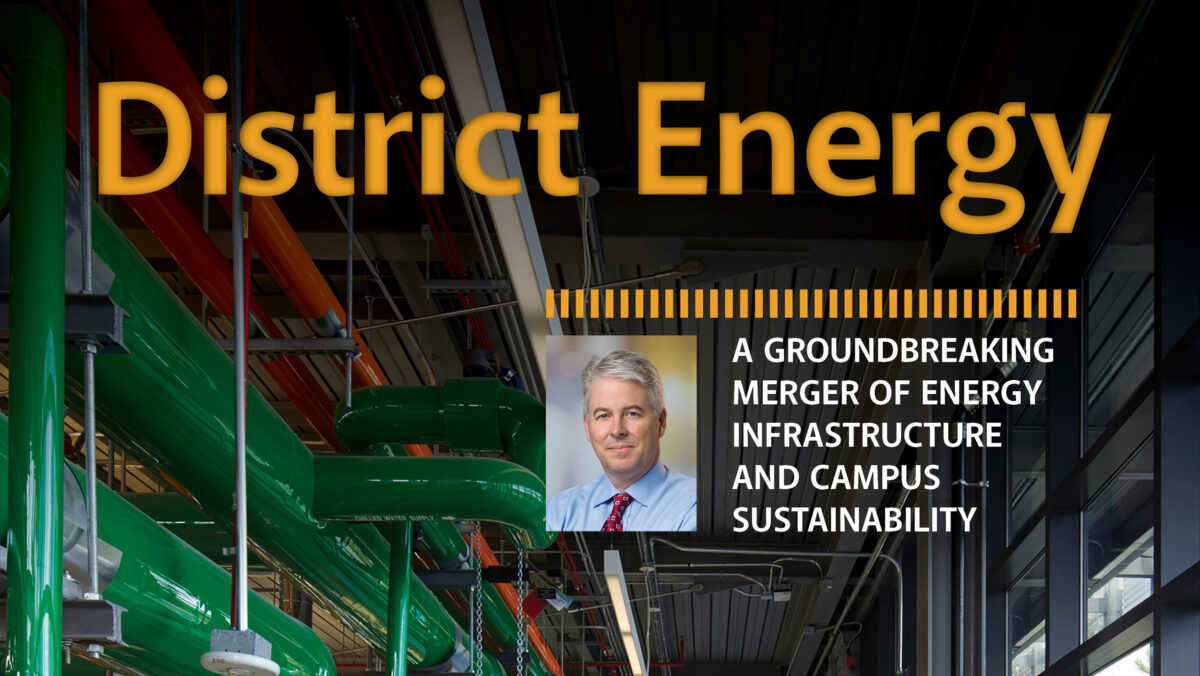 *A previous version of this article appeared in Spring/Summer 2022 issue of District Energy Magazine. To learn more about District Energy or read the full publication, please visit the website.

Ever since I began writing this column 12 years ago, I’ve focused on the impact of sustainability programs – like the U.S. Green Building Council’s LEED rating system – on district energy. Originally, owners and operators were concerned about how district energy would be treated in the pursuit of LEED ratings for connected buildings. University leaders were making sustainability promises around energy use and/or carbon footprint and were naming target dates to deliver on those promises – dates well into the future and beyond the likely retirement of those setting them. As those deadlines get closer, current campus leaders are now having to look seriously at how to meet them. They are commissioning campus studies and implementing significant capital projects to reach these goals.

To get a peek behind the curtain, I sat down recently with Meghan Riesterer, the assistant vice president of campus energy and sustainability at Oberlin College and Conservatory in Ohio. Riesterer, who just completed a seven-year stint on IDEA’s board, joined Oberlin in 2014, and during her tenure has led the team that is determining and implementing the best course of action to achieve a carbon neutral campus by 2025. Yes, that’s only three years away! Our company, RMF Engineering, developed a utility assessment and future load profile for Oberlin as one of the first steps in a long process.  Since then, much progress towards the university’s carbon neutrality goal has been achieved (see “At Oberlin College, a fast-track transformation toward a carbon-neutral campus” in the Winter 2022 issue of District Energy magazine). I reached out to her to learn more about the details.

Tim Griffin: From an early age, you sought a career where you could help build a more sustainable world. How did that come about and how did it lead you to district energy?

Meghan Riesterer: I grew up in a neighborhood that encouraged its people to live, play, work and explore in a way that respected resources. Later, I learned that a thriving community was a privilege not all are afforded, so I asked myself what exactly a healthy neighborhood should look like. I took on formal training in city planning. (Plus, I was really good at SimCity. Remember that video game?) I studied systems above ground and below ground, and it was the underground part that led me to district energy. I came to realize that a healthy district energy system creates the most sustainable community of all.

TG: Many readers are probably unaware of Oberlin’s rich progressive history. There’s an Oberlin Road where I live in Raleigh, N.C., that I only recently learned is named after Oberlin College. Can you speak to that history?

MR: You’re not the first person to tell me about a place named after Oberlin College. A good friend who many of us know in district energy circles, Joe Riemer with Trane, took his family to Glacier National Park where the Going to the Sun Road passes Mount Oberlin – so named because Lyman Sperry, a member of the 1895 party exploring the park, taught at Oberlin. Oberlin has a long history of seeking solutions to difficult global questions. Oberlin was the first college to grant bachelor’s degrees to women in a co-ed setting and it was a pioneer in the education of African Americans. Less well known is Oberlin’s founding commitment to building a sustainable community. Oberlin was established in the 1830s with the motto “Learning and Labor,” which literally meant that tuition was free and that students were expected to contribute by helping build and sustain the community. Fast-forward almost 200 years and tuition is far from free, but the strong commitment to building a sustain-able community remains.

TG: Oberlin set some very aggressive goals for sustainability in terms of both a net-zero result and a timeline ahead of most campus target dates. Why did it choose that route?

MR: Oberlin strives to lead by example, and when there is a sense of urgency – as is the case for the global climate crisis and for our aged campus steam infra-structure – an aggressive timeframe sometimes seemed like the only option.

TG: When you joined Oberlin, the carbon commitment was already set, and yet you were the first assistant vice president of campus energy and sustain-ability they’d ever had. That had to be both exciting and overwhelming. Where did you determine you needed to start?

MR: I started by educating our cam-pus leadership, faculty and students as well as community members – anyone and everyone who would listen, really – about the true asset a district energy system can be for a campus sustain-ability program.  My title marries energy infrastructure with sustainability, so that seemed like an obvious place to start. I never imagined how important it would be to advocate for our district energy system, especially with an aged system that was viewed as a liability when I got here – as opposed to the asset it once was and could be again. It was the foundational piece of our current steam-to-hot-water campus conversion.

TG: What were the steps you took to move toward the finish line?

MR:  Like most campuses, we knew the biggest impact to our carbon profile would be made by addressing our thermal infrastructure. And we recognized the need to approach a solution in a holistic way – one that considers the economy-of-scale benefits to modernizing electric, fire protection and fiber networks. We developed an initiative to advance campus utility infrastructure and to create a comprehensive utility systems solution for the next half century and beyond. Which is a huge undertaking, even for the smallest of schools. To make this effort more manageable from a decision-making perspective and ultimately from an implementation perspective, we designed the Sustainable Infrastructure Program along three tracks: steam-to-hot-water conversion; identification of the preferred organizational and financial structure; and deciding on the preferred carbon neutral source. After gaining final board approvals in March 2021, we launched a $140 million, four-year, campuswide conversion to geothermal heating and cooling, positioning the institution as a national leader in clean energy. The project has three main components: Conversion to approximately 1,100 geo-thermal wells as the common source of heating and cooling across campus; replacement of deteriorating, century-old steam pipes with efficient, low-temperature hot water pipes and new chilled water pipes; retrofit of campus buildings to accommodate the new energy system; and equipping approximately 11 more buildings with air conditioning. While the finish line to carbon neutrality is now visible, we are not there yet. Up next will be addressing our GHG (greenhouse gas emissions) Scope 3.

TG: Securing funding is probably a scary step for many campuses where price tags for implementation can be in the hundreds of millions of dollars.  Can you talk about the challenges Oberlin had to overcome on that front?

MR: To me, the favorable financial response has been one of the most rewarding outcomes of this. Our innovative certified climate green-bond offering attracted almost three times as much investor interest as sought, and it came at the best rates the college has ever received. It was only the second certified climate bond offering by a U.S. college or university, and the third such offering in the world. Morgan Stanley was the underwriter, and PIMCO is the largest investor, accounting for about 37% of the bonding. MacKay Shields, a major fixed income asset manager, holds about 25% of the offering, and Goldman Sachs has about 15%. In other words, serious money sees the project for what it is: an energy transition model that is clearly viable and in step with good environ-mental stewardship.

TG: The concept of green bonds is interesting, in that investment banks have found a way to attract investors who want assurances of returns on initiatives that are sustainable. I’m curious as to how Oberlin was vetted to ensure funds would be invested in projects that would achieve both goals.

MR: The bond offering was certified by the Climate Bonds Initiative (CBI), an imprimatur by independent experts who verify the environmental benefit of such investments. Specifically, the CBI certification means the projects meets standards that mesh with the targets of the Paris Climate Agreement. We also had Oregon-based Kestrel Verifiers provide the review to support certification.

TG: How important was it person-ally to engage with stakeholders?

MR: Our engagement and communication strategy was and is key to not only our campus infrastructure work but our entire sustainability and campus energy office work. I’m very intentional about starting each coordination with the “why” we are doing this – permanent and significant carbon reduction and operational savings. Having a shared vision inspires civic, campus and community leaders to work together to build a strong “climate positive” environment. At Oberlin, people are constantly imagining, studying, designing and striving to create the world they want to live in. And it’s working.

TG: From start to finish, what was your biggest challenge?

MR: The biggest challenge was not the technical solution required but the political and business solutions required to get the program implemented.

TG: Is there anything you may have done differently?

MR: I would have slept more!

TG: What role can district energy serve in helping campuses achieve their sustainability goals, and how should IDEA members be thinking about communicating with campus stakeholders?

MR: It’s crucial to make the connection between establishing district energy as a financially viable solution in creating a carbon neutral campus.